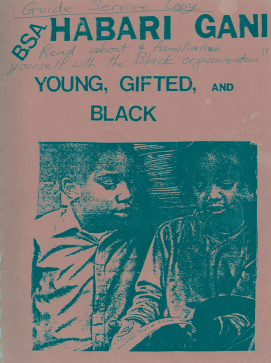 Particularly during the 1980s, Kwanzaa and the principles of Kawaida occupied an important place in the political and cultural imagination of black students at UVA, especially those affiliated with the Black Student Alliance (BSA).  It was evident in not just their celebration of the holiday, but also in their naming of several of their publications.   Starting in 1975 with the arrival of Pride, African American students sought to provide an alternative to the Cavalier Daily, which over the years had been both an ally and a source of frustration for the black undergraduates.   In 1981, the students came out with the short-lived Ujamaa and then five years later published Habari Gani.  Copies of both newspapers can be found in the “Black Student Alliance files” section of the website.

Footage found during the production phase of our film, Sugarcoated Arsenic.