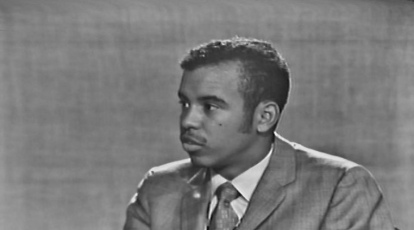 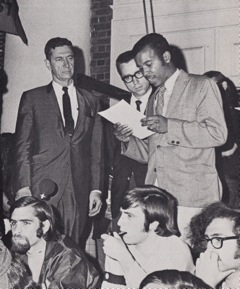 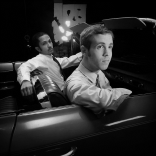 This week marks the 50th anniversary of the May Day Strike of 1970, a week long upheaval at the University of Virginia sparked by President Nixon’s invasion of Cambodia and the murder of four Kent State coeds. That historic upheaval, which involved students launching strident criticisms of militarism, racism, and economic injustice, inspired the second film in our Black Fire series: We Demand. A labor of love, the film involved a great deal of archival work: Digging through crates of 16mm film and audio cassettes, interviewing former students, and dissecting newspaper clippings that sometimes provided more questions than answers.

We Demand tells the story of the anti -Vietnam War Movement from the perspective of James R. Roebuck, a Philadelphia-born African American who studied history at the University of Virginia during the late 1960s and early 1970s. Several weeks after Roebuck’s election as the first black president of student council, UVA erupted in political protest over the Ohio National Guard’s brutal murder of four coeds at Kent State.

If administrators at UVA expected only an episodic outburst of dissent from students, they were in for a major disappointment. Over the next few days students boycotted classes, occupied buildings, and pushed the University’s president, Edgar Shannon, into a heated confrontation with state legislators in Richmond. On the strike’s second day, student leaders composed a list of demands that ranged from ending ROTC to removing all law-enforcement officials from the grounds to the University publicly committing “itself to accepting 20% as a goal for the enrollment of black students throughout the University.” The last demand on the students’ list of grievances addressed the labor issue: “We demand that President Shannon express public support for the right of University employees to strike and bargain collectively.”

At the center of much of the campus upheaval at UVA was James Roebuck. A supremely gifted leader, Roebuck had the task of mediating the brewing conflict between his peers, the University’s president, and a seemingly trigger-happy state all too ready to rely on force to quell dissent.  Five days into the strike, Roebuck faced his greatest challenge when local police and the National Guard harassed and arrested dozens of students, invaded several fraternity houses on Rugby Road, and all but turned the University’s storied “academical village” into a war zone.

To regain the confidence of his students, President Edgar Shannon fiercely condemned the state for its excessive use of force. Shannon also registered his frustration with “the continued alienation of our young men and women owing largely to our nation’s military involvement in Southeast Asia.” Ever the diplomat, Shannon arranged meetings between student activists and key Virginia lawmakers to discuss the critical issues facing the nation. “It is my firm conviction,” Shannon explained in a letter to Senators William Spong and Harry Byrd, “that student views and questions on this matter need to be heard by those in a position to influence and shape national policy. Likewise, I feel it is important that our students have an opportunity to learn more about this complex matter directly from those in positions of national leadership.” 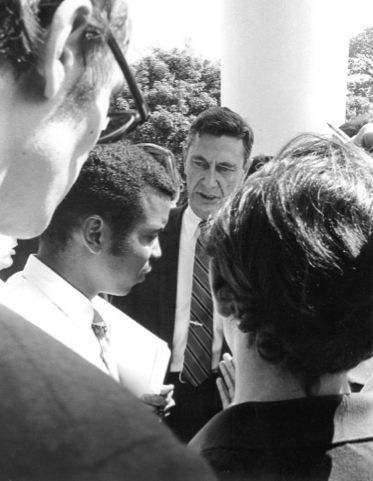 To learn more about the relationship between Shannon and Roebuck, Kevin and I traveled to Philadelphia in the summer of 2014. Since the  mid-1980s, Roebuck has represented the 188th Legislative District (West Philadelphia) in the Pennsylvania House of Representatives.  Walking us through the tumultuous aftermath of Nixon’s invasion of Cambodia and the Kent State murders, Roebuck described a college campus in the throes of radical change.  His recollections, along with countless hours of audio of the week’s events, antiwar memorabilia and placards, surveillance video, and photos, provided the groundwork for our film, We Demand.

Starring Ricky Goldman as James Roebuck, Richard Warner as Edgar Shannon, and Ryan Leach as student activist Tommy Steele, We Demand captures the efforts of progressive students to bring justice to the campus and order to the world. Structured along the lines of a road movie, We Demand was shot in five locations: a bus depot, a dormitory, a small factory, Carr’s Hill(the residency of the University’s president), and Highway 29. The film opens with Roebuck and Steele composing the list of student demands, then segues into President Shannon’s and James Roebuck’s preparations for a series of grueling meetings with politicians in both Richmond and the nation’s capital. The last scene ends on the open road as Steele and Roebuck engage in a thoughtful conversation about the last few days.  Sensing his comrade’s concern about his well-being, Roebuck recounts his political trajectory, shining light on the political lessons he received from his mentor, the Reverend Marshall Shephard, his activist work with the NAACP as a youth in Philadelphia, and his involvement in the civil rights movement during his undergraduate years at Virginia Union.

Working on We Demandwas a blast. The antiwar movement has long been an area of interest for me, and it has always been my desire to tell the story from the perspective of an African American. Far too often, scholarly and cinematic accounts of the antiwar movement focus exclusively on the white left.

Screened at film festivals, art galleries, and college campuses across the nation, We Demand has resonated strongly among viewers who embraced the films’ critique of racial and economic injustice, sexism, and militarism.

Sample of We Demand Film Screenings Since Release